Wow these posts roll around quickly! Probably testament to how busy I’ve been, or at least felt; so lets get started.

Last weekend was one I had been looking forward to for a long time, which is why last week felt slow as I found myself counting individual seconds until it arrived.

Friday, when the working day ended, my ex-manager and I celebrated the end of an era with the longest, most intense game of Jenga and a couple of pints of Pepsi. Following that, Kirsty and I stocked up on junk food for our long weekend, before watching Ru Pauls Dragrace and playing video games, as is our usual pastime. She went to bed early, due to having work Saturday, and I stayed up putting some quality time into God of War. Absolutely fantastic game, if anyone is interested.

Saturday, I actually sat down and tackled my photography work. Greg and I, over at Level Up Photography, are now full steam ahead with getting this side-venture sorted. It’s something we’ve dabbled in for absolutely ages, and, whilst we are full of passion when an event comes along, in between each booking we tend to drift into the realm of procrastination. No longer. Or so we’ve said. May is our month to get this sorted and so we’re putting the work in.

Aside from a Morning of Photography work, Saturday was also the evening of Wicked. We had some lovely food at Zizzis (though, the restaurant itself was far too loud and we had to shout to hear each other… When did I get so old?) and we followed it up by an absolutely stellar performance. It was phenomenal, and I don’t say that lightly. The opening scene just blew me away and I was transfixed for the rest of the show. It was something Kirsty had been dying to see for years and I think it lived up to expectations; so that’s something I did right! 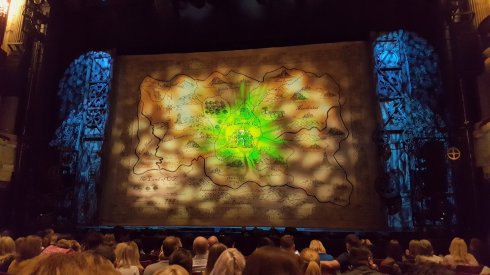 Speaking of living up to expectations… Sunday! Sunday was Avengers: Infinity War. Those who know me, will know I’m a massive comic book fan. On top of that, I’m a fan of the Marvel Cinematic Universe too who, against all odds, never seem to make a bad film. Some are better than the rest, by factors of tens, and some are merely ok or average, but never are they bad. Needless to say, I had unbelievably high expectations of Infinity War, which I only just managed to keep in check until the lights dimmed in the cinema, but damn was it good. 10 Years of investment in the MCU, double that investment in the greater world of comics, and it was a fanboys wet-dream. We also had a Nandos to follow it up, which was nice, but let’s just say nothing that day compared to that screening in the cinema.

Monday, Kirsty and I had off together again. We’d booked it as a lazy day for our long weekend and it was much needed. I did a few chores, whilst Kirsty played games, and we ended up being a little naughty and ordering a takeaway (eating out two days running and having a takeaway after? No wonder the Wedding Weight isn’t shifting…)

Tuesday and Wednesday were mainly work with little else to report from them. The aim of these weekly posts is to, firstly, make my blog a little bit more personal, for those that are interested in such, and also to help me reflect on the good things going on. So far, it’s working; I feel great just typing these posts up. (Hell, I’m mainly just buzzing about Avengers still: How was it so good?!). That said, not every day has some big event and that’s more than ok. Some days are just average, some days are just filled with work, and there’s nothing wrong with that. I’m happy for Tuesday and Wednesday to be just that.

Thursday was a little like Tuesday and Wednesday, but with a little bit more. I had a meeting I was nervous about, and hopefully I can say I didn’t mess up in it. I struggle with my confidence and it’s great to be able to leave a meeting I was thinking about the night before, and feel like I did well. I also spent my lunchtime with Greg, for our fortnightly Level Up Lunch, where we discussed the future of the business. We came to the firm conclusion that May is our ‘Get Shit Sorted’ month, so you can expect future updates to hold more photography news. Lastly, but most importantly, I wrote this blog! Along with Mondays blog! And along with a first draft for an Infinity War inspired post I’ve tentatively called A Case for Thanos, which is coming at a later date! I didn’t write anything bigger, or more creative (Sorry, Jane! I know you’ll be watching for some evidence here), but at least I’ve written something. With a focus on Photography for May I will probably have to utilise extra time towards that, so writing may take a back seat until June. Though, I’ll keep the blog going! Can’t miss out on you guys.

Hope everyone else has had a good week.

What were you grateful for this week? Let me know in the comments below!

One thought on “27th April to 3rd May: A Friday Feeling”